Chargers Fan Punches a Vikings Fan in the Face… 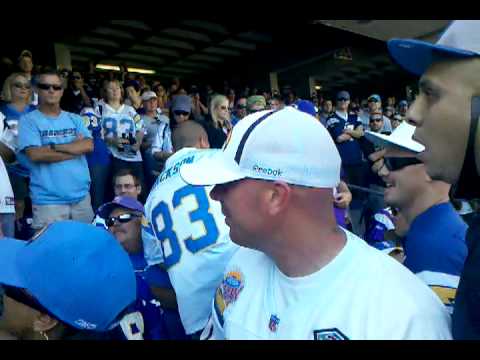 Wow, there are so many things wrong with this video, I’m gonna need a sec to break them

down. Before I do, I want to get this out of the way…I do not condone fighting. These guys are all jackasses, you shouldn’t fight at sporting events, it’s idiotic…especially if there are kids around. Look at this poor little guy to the right. Scared for his freaking life. Nice work, jerks. Okay, got that out of the way. Here are some other thoughts. I’m gonna get some screenshots of this action and break it down as I see fit.

You don’t come to a game in San Diego wearing Vikings gear and talk trash to a bunch of Chargers fans, even if it is the first half and you’re actually winning the game. You certainly don’t ever do it sporting with an awful dyed purple and green gelled up mohawk. Yes, I understand he thinks it’s a yellow mohawk. He’s wrong…that’s green. Joker. Not to be outdone by that look, you sure as hell don’t do it rocking a cutoff t-shirt with an ultimate frisbee MLB-ripoff logo of “goaltimate” on it. Look at these jokers. That look alone is asking for an ass-kicking. There’s more… You know… they make jerseys for chicks. That’s not one of them. Did you notice, one, that dude was carrying around a feathered boa, and two… he rolled it up into a ball (possibly to serve as a boxing glove?) after his buddy, unbeknownst to him, got Don Flamenco’s in the face? Wait, I just realized this whole video started because some Chargers fan jacked that dude’s feathery boa. Go look. That first screenshot up top… that’s his reaction, arms open, and all butt-hurt somebody swiped his boa. That’s fantastic. Wait, it can’t be… is that… is that… Captain Elite?! No confirmation from Mac and Charlie yet, but this man and his red polo is definitely Elite Security, and he means business… as you can tell from his neon green shades. Nice Winslow throwback on the left, btw. Nice shirt, bro. I’m impressed you did a triathlon and all, but to a Chargers game? Really? I guess it was 9/11, those are stars and stripes… so I’ll let it slide. What I won’t let slide is this… Aside from the sweet Alworth throwback jersey…what is happening with this cat? The sly little stache, the earring, the two-toned purpley/red on the top dyed hair. What? Wow. For the final screenshot, this is for a split second at the very end. AND THE BOA IS BACK ON! (typed triumphantly in a Dr. Venkman tone, “And the flowers are still standing”) Wait. Goaltimate is gone! Where’d he go? Obviously the idiot Chargers fan in the white VJ jersey with the porn stache that popped him immediately split like any experienced stadium puncher does, so Captain Elite can’t find him… but where’d this goaltimate joker go? Also, I know this whole post is a bit misleading because that wasn’t much of a ‘fight’, it was more of a pissy shouting match that turned into a one-hit-wonder-non-event. But hey, it was at our home-opener, so it’s certainly blog worthy. I need talk to whoever this guy who filmed this is… I need to find out how the rest of the game went. I need to know if that purple and yellow feathered boa survived the day.