Gum Throwing Umpire, Jordan Baker, Has No Respect for Baseball Gumgate 2013! That’s me. A very angry me. This minor league fill-in umpire, Jordan Baker, needs to be fired. Okay, maybe fired is a bit harsh… but fined at least. Or sent back to the bush leagues. This piece of trash umpire was on third base last night for the Padres vs. Blue Jays walk-off Friars win. Every single half inning, until his gum ran out around the 14th or 15th inning, he would take a few steps out to the outfield as players jogged back to their dugouts and hurl his gum. Just chucking giant wads of chewed up gum into shallow left field. There’s a close-up of Jordan Baker. I’d never heard of him prior to last nights game. That’s the way it’s supposed to be with umpires. Nameless, faceless. I didn’t end up in the front row seats in left field until the 8th inning, and when I did, I was informed of his gum throwing antics. I didn’t believe it until I saw it. That’s when things started to escalate. I started laying into him every time the half inning came to a close. Shouting that he was a disgrace to the game and disrespecting the players, the field, and umpires everywhere. I know it’s hard to see, but I zoomed in with my iPhone and tried to get a photos of the giant pile of gum. As this behavior continued, I may have shouted “COWARD!” at Jordan Baker a time or two. Our crew: Caster, Body, Showman, Gibbs, Dilly, Big Dave and myself may have started a few “JOR-DAN! BA-KER! *clap-clap-clapclapclap* JOR-DAN! BA-KER! *clap-clap-clapclapclap*” chants. This did not deter him. Not only did he not stop, he started taunting me/us with his hand motions, waving me off, motioning me to sit down… then he walked over to the crew chief Angel Hernandez (I think) at second base, and started chatting about me yelling and pointing at me.

The next half inning? This Jordan Baker clown drew out his pockets as if to say, “I don’t have anymore gum”… then pointed over to his boy Angel, and then the FREAKING CREW CHIEF REACHED INTO HIS MOUTH, GRABBED A FAT WAD OF CHEWING GUM, AND THREW IT MY DIRECTION. Then they both had a nice jolly laugh. These friggin’ guys. Of course, they couldn’t throw the gum all the way to me from the edge of the infield, but they tried. I was able to capture some video of the event early on in extra innings. Apologies for my language. 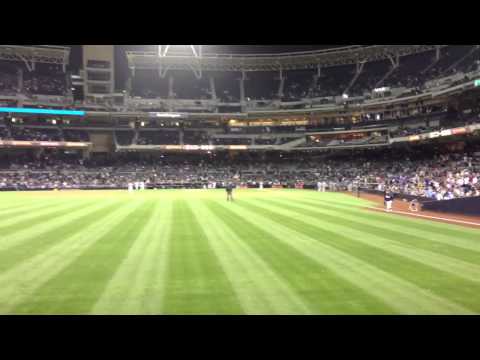 Again, not great language, but I was so fired up, I wasn’t thinking about it… and what in the world would possess me to turn up an accent that I don’t have and drop a “WATCH OUT FOR THA GUM, SWEET’EART!” is beyond me. Seemed funny at the time. Regardless, you can clearly see him chucking his gum. A fan nearby sent me another video of it happening, and me yelling at him toward the end.

Hear those boos? He knew what he was doing. He knew it was wrong. He did it anyway.

Now, you might be saying to yourself… “players spit gum and seeds on the field all the time, calm down, BP… what’s the big deal?” Well, I’ll tell you what the big deal is. This clown is a replacement ump with no respect for the game of baseball. I know Luke Yoder, the head grounds keeper for the Padres. Dude is a stud, best in the business. He and his team work their asses off to make the field at Petco the best kept field in all of Major League Baseball. If the players decide to throw stuff on the field… that’s one thing… for an umpire to do it with a fat wad of bubble gum… every freaking half inning… is despicable.

Here’s our old buddy Peavy arguing with him. List just seems to go on and on with this guy. My mom taught me to choose my battles wisely. She’s probably questioning this one… but for whatever reason, I can’t stand for this gum throwing ump. It’s got me fired up. Such arrogance and disrespect for the game that I love. I won’t stand for it. Somebody get these videos in Selig’s hands. I’m not stopping until something is done or this joker is sent back to the minors.

Sleep with one eye open, Jordan Baker… you just met your worst nightmare.

**UPDATE: He strikes again… and his wife emailed me***