Harrison Ford to David Blaine: “Get The F**K Out Of My House”

So David Blaine had his Street Magic special on last night. I’ve seen some of it. As usual, amazing stuff. He’s crazy cocky, and rightfully so with the crap he pulls. Amazing reaction by Harrison Ford. Looks like he’s gonna cry. His world is completely shattered. I have no clue how Blaine did this trick. Amazing. Some of his tricks, you can figure out. Like this one he did last night on a bunch of celebs like Will Smith and Kanye and Aaron Paul.

YouTube commenters say this is simple. Over a long period of time, Blaine has pierced a hole in his hand. Similar to an earring. He keeps it open, then when it’s time to do his ice pick trick, he puts some makeup over the hole, and he pierces that bad boy through and there’s no blood.

Then there’s this… turning a $1 to a $100 dollar bill in front of some kids on the streets. 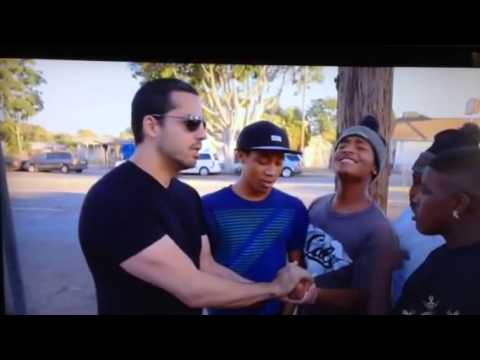 This entry was posted in caption contest and tagged david blaine, street magic. Bookmark the permalink.