That is Richard Marshall’s custom gold Bentley. I wrote all about the transformation of his custom Bentley here. Has he sold it to teammate Eddie Royal? Check out the license plate on this gold Bentley spotted at Qualcomm Stadium.

In addition, here’s some video of the Bentley on 1-15 with the Eddie Royal plates. 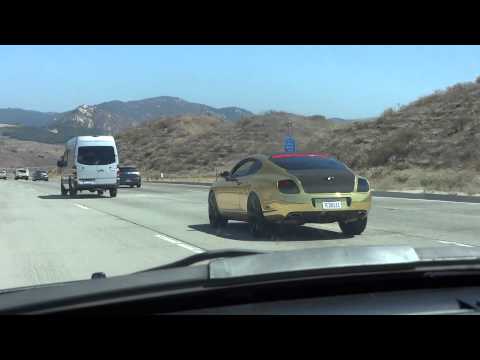 Sure looks like Eddie bought it from him. Technically, there’s a couple different scenarios that could be at play here… Eddie Royal bought an exact replica of Richard Marshall’s Bentley? Marshall just gave it to him? Or finally… Richard Marshall is just next-level stalker obsessed with Eddie Royal and is paying tribute to him? Also, what do the plates mean? Obviously a play on Eddie’s name and number 11… but is he always open like 7Eleven or something? I dunno. *update* – or the plates are standard issue and mean nothing!?

In conclusion… who cares.