How’s that for a blog title, huh? Really churched that one up. The MNF football game between the Rams and the Giants gave everybody something to blog and complain about. Showman tweeted about this Boley touchdown celebration to the face as it happened. Has to be the most dick move I’ve ever seen on a football field from a player to a non-player. Just drills him. Kid couldn’t even react because nobody in their right mind would think you’d have to react… because, you know, nobody in their right mind throws a football point blank into someone’s face after a TD. 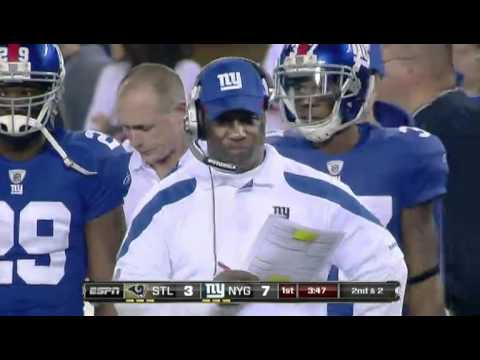 The other thing that every talk radio station has blabbered about for 72 hours is the fake injuries. I admit, when I saw that, I thought it was so freaking bush. So obvious. But, really, the only thing weird about it… was how BAD the stupid Giants were at doing it. That’s it. Faking injuries has been part of the game forever and it will be forever. So get over it. Just, if you’re gonna do it… act like it’s not your first rodeo, you idiot clowns. I hate Eli Manning, and I’m done.

[lobbed by Little Caster, his first]